The "Pantry in Action" series shows creative ways of using all the wonderful food we've preserved during the year. I will include recipes wherever appropriate with links back to the post(s) where a particular ingredient (or ingredients) was canned.


After a rainy, but productive Saturday, we were rewarded with a beautiful sunny Sunday. It started out cloudy and muggy but by noon the sun was out and it turned into a lovely afternoon. So, I decided to invite Colin over for a barbecue.

Earlier last week, I had found a nice little boneless pork loin roast that I had stashed away in my freezer so I decided to try a method I had used previously to great success on spare ribs that involves braising, applying a dry rub and then barbecuing low and slow, slathering with a tasty sauce. But, to gild the lily once more, I thought I would try adding hickory smoke to the mix. 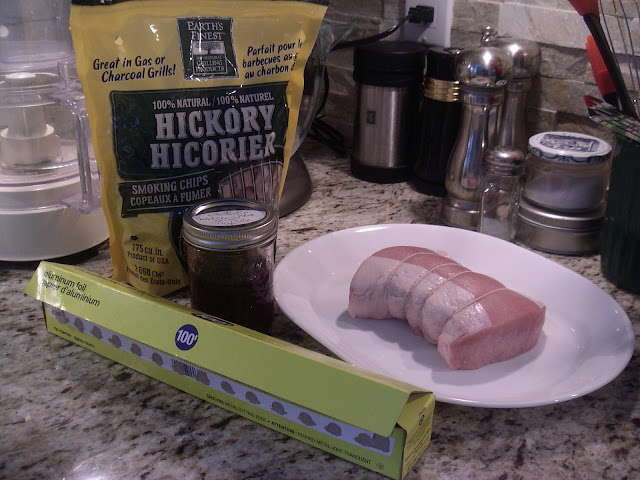 So, to start, I gathered a few things together: my thawed pork loin roast, some aluminum foil, a small half-pint jar of my Cherry Barbecue Sauce, and a bag of hickory wood chips. 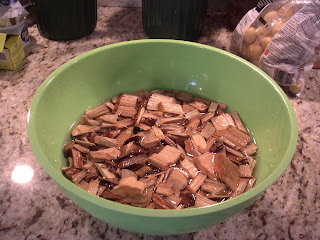 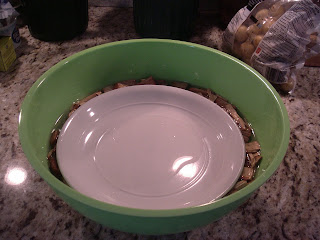 Put 3 cups of wood chips in a large bowl a cover with warm water. I placed a plate on top of the chips to keep them submerged. Allow the chips to soak for at least 20 minutes. I left mine for over an hour. 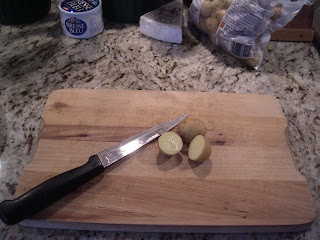 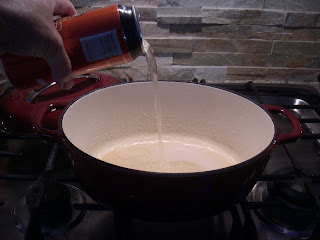 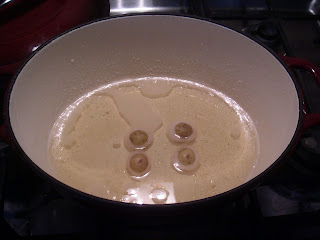 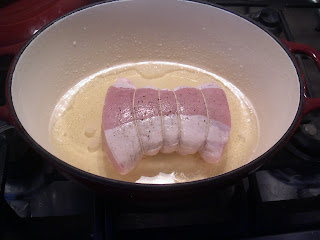 Take 2 similarly sized mini potatoes and cut them in half to use as stilts for the roast to sit on. Pour a can of apple cider into a dutch oven and arrange the four potato halves in the cider so they will support the roast. Lightly oil the roast, season with sea salt and freshly ground black pepper and place gently atop the potato halves so the roast sits above the cider. 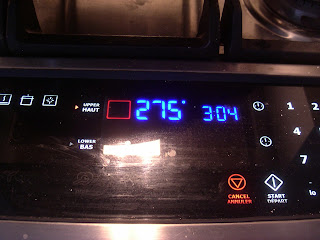 Cover the dutch oven and place it in a 275F oven to braise for about 30 minutes to an hour, depending on the size of the roast. 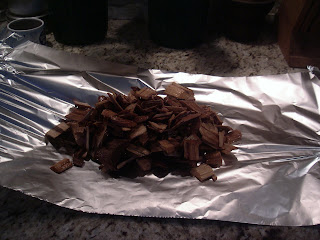 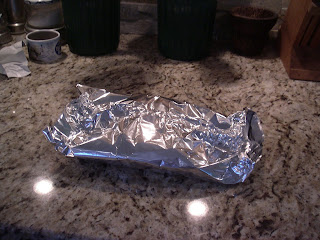 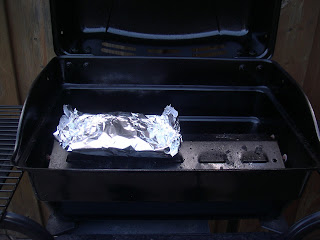 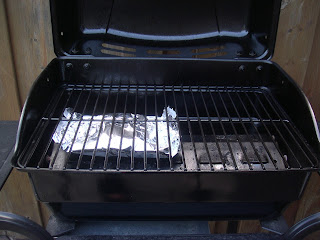 Meanwhile, prepare the soaked wood chips by folding them into a foil packet leaving the ends slightly opened. Pierce with a fork  in several places on both sides. About 20 minutes before the roast is ready, remove the grill from a gas barbecue and place the packet of wood chips on one side of the heat shield. Replace the grill then light the entire barbecue, close the lid and leave on high heat for about 15 minutes or until there are generous tendrils of smoke issuing from the wood chip packet and you can readily smell the hickory.

For a charcoal barbecue, leave the grill off and light the coals right after you've put the roast in the oven. When the coals have a light coating of ash, spread them out and place the packet of wood chips directly on the coals to one side of the barbecue. Replace the grill and cover the barbecue. Leave it until there are generous tendrils of smoke issuing from the wood chip packet and you can readily smell the hickory. 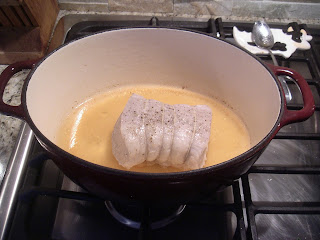 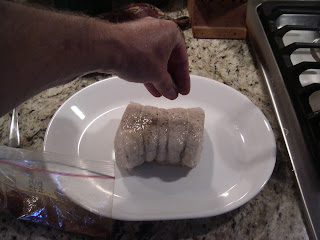 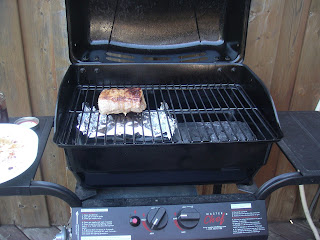 Remove the roast from the dutch oven to a platter and rub with a dry rub. Turn all barbecue burners down to low and place the seasoned roast on the grill above the wood chips. Brush the top and sides of the roast with a nice barbecue sauce like this Sweet Cherry Barbeque Sauce. Close the barbecue and allow the roast to slowly cook in the smoke for about 30 minutes. Watch carefully. With a boneless roast it's easy to overcook it and end up with a dry chunk of meat. This method really does work best with bone-in cuts and is especially good with ribs. 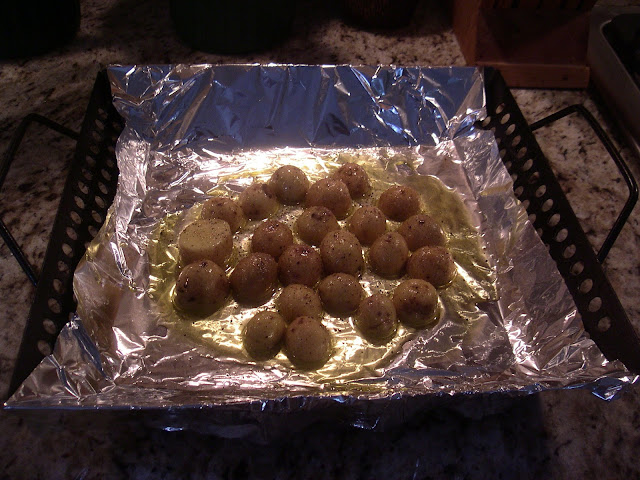 While the roast is starting to grill, halve some more mini potatoes and place in a foil-lined barbecue basket with a bit of olive oil, tossing to coat. Turn cut side down so they crisp up. Add in the four half potatoes from the braise. Place the potatoes on the empty side of the grill and turn that burner up to high. Turn the roast over and brush with more barbecue sauce. Once the potatoes start sizzling, turn the heat down to medium-high and continue to cook. Every 10 minutes, turn the roast and brush with more sauce until a nice glaze develops.

Serve roast and potatoes with some steamed mixed vegetables.

Posted by The Locavore at 1:06 PM No comments:

The Last Weekend of Summer

The summer heat continues and even though the sun is now rising later (already I am getting up in the dark -- ugh!) and setting earlier, it... 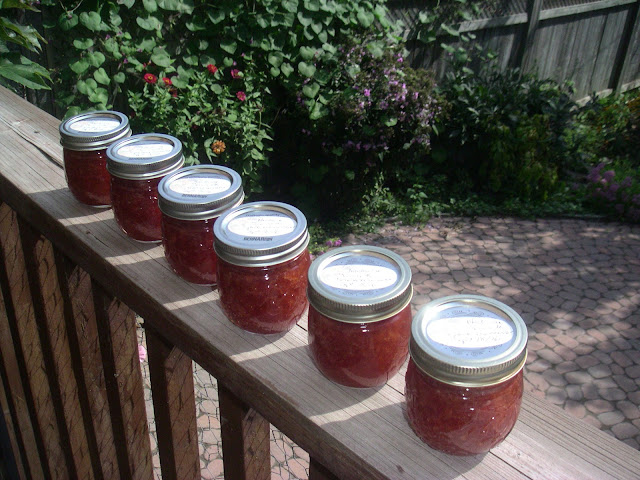 The Locavore
Toronto, Ontario, Canada
Welcome friend! This is a chronicle of my attempts to live simply, healthily and locally, eating "within a 100 mile radius" as often as possible. I hope to share my many life interests here as well as my "wonderings" -- musing on miscellaneous thoughts, news items, ideas and things that I run across in my daily life. Drop me a line and say "Hello!" sometime. I'd love to hear from you.